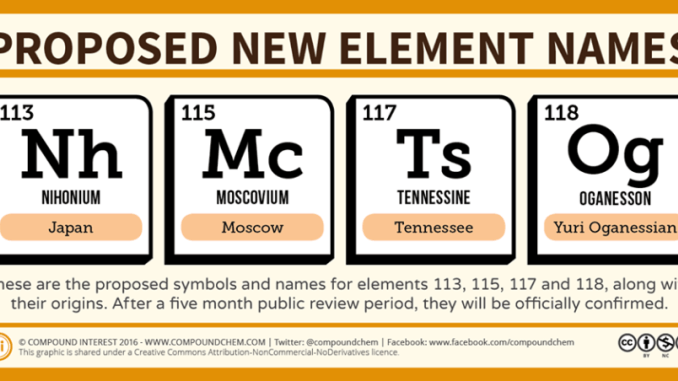 Four new element names are on the table

Four new element names are on the table

Time to throw out that old copy of the periodic table: New names have just been penciled in for four elements officially recognized back in December. Nihonium, moscovium, tennessine, and oganesson will grace the blocks assigned to atomic numbers 113, 115, 117, and 118, said the International Union of Pure and Applied Chemistry (IUPAC) today. Barring any serious challenges during a 5-month public comment period that ends in November, the new names will be officially added to the table (above). Nihonium, discovered by a Japanese team, means “the land of the rising sun,” while moscovium and tennessine are named after places near the labs where they were discovered (Moscow and Tennessee, of course). And oganesson recognizes the work of Russian chemist Yuri Oganessian. By tradition, the right to suggest a name for an element is granted to its discoverer, although IUPAC has the final say. And with different labs often racing to be first, it’s not always clear who should have the honor. Though this round of naming seems to have gone off without a hitch, other dramatic battles over element names have been waged in the past, from the hundred-year-long battle over the element now called niobium to the Transfermium Wars of the 1960s. Stay tuned to see if we’ll have another elemental battle on our hands. Indeed, the naming of elements is a difficult matter.